Mike Duxbury - The Power of Editing

We are fortunate to have someone as experienced as SCMM member Mike Duxbury to deliver a presentation on this subject.  Mike has nearly 40 years of experience working as a professional editor for television.  On 11th May he took examples from each of 3 films that he has worked on with SCMM members:  The Madness, Ties that Bind and It’s a Deal.  He picked out edits he’d improved and explained why they worked.  A very useful exercise from which we felt we learned a lot.  At the request of SCMM members, Mike has written up his notes and they have been circulated to members.

Tonight was also the premiere of Alan Moore’s film It’s a Deal. This was very well received. 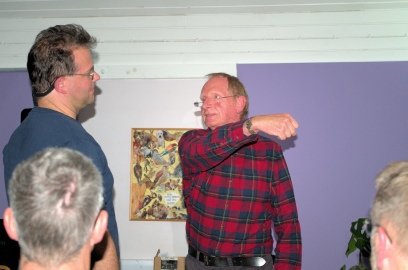 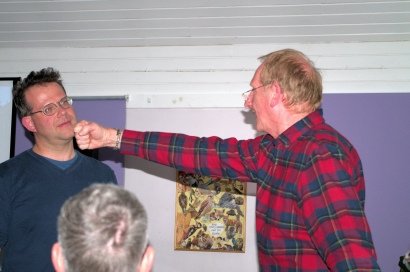 Mike Duxbury takes a swipe at Steve Jakab - all in the interests of filmmaking.  Mike is demonstrating how to shoot  a convincing fight scene without hurting anyone.