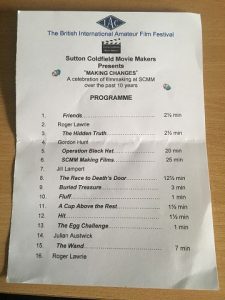 The meeting on 25th April was held at the Hilton Garden Inn in Brindley Place in Birmingham, and was a presentation for BIAFF (the British International Amateur Film Festival).  It was the first time that this festival had been held in Birmingham.   Members brought along family and friends to what was a celebration of the past 10 years of filmmaking at Sutton Coldfield Movie Makers.  There was an audience of around 80 people.  As well as Club members and their families we were pleased to welcome students and teachers from Sutton Coldfield College who came to see the first screening of The Wand - a fantasy film written and directed by Club member Julian Austwick - which was made in collaboration with the College.  The audience also included visitors to BIAFF who were staying at the hotel, and was opened by the IAC chairman John Howden.

The evening's programme demonstrated how the Club has changed over the past 10 years.  The changes which were highlighted were the move to making films together instead of just as individuals, and the move from competitions to challenges where instead of competing against each other we appreciate and enjoy each other's films.  There were four presenters in the room: Roger Lawrie, Gordon Hunt, Jill Lampert and Julian Austwick.   The centrepiece of the evening was a compilation of short clips from 15 Club films made over the past 5 years or so, punctuated by wonderful transitions between the films in the form of introductions to the next film by Julian Austwick and Fiona Dunn.  The compilation also included vox pops of some of the filmmakers saying what they particularly enjoyed about making their films and what they get out of being a member of Sutton Coldfield Movie Makers.   It ended with clips of members having fun making films together.  The whole evening really brought home what a great club Sutton Coldfield Movie Makers is!